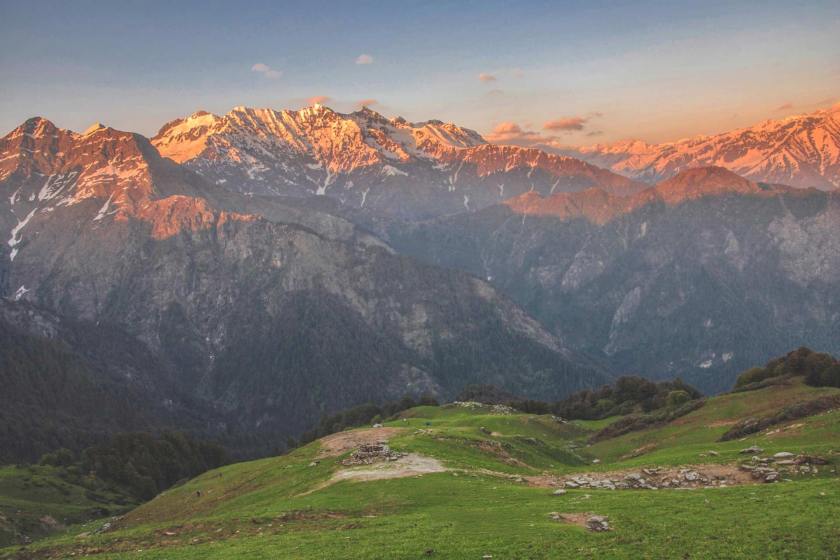 The next day we drove down from Müngla to Güshàini to meet up with Stephan once again, at his office, a little rented room on the ground level of a small two storey building. He had a small team of interns working away hard on their laptops. They were tracking payments, updating photographs on the co-operative’s website and Facebook page and preparing marketing material. Many came from the best business schools in India, while some came from other countries. They were invaluable help for the fledgling co-operative finding its roots. I could not help feeling a little envious-it was a great internship experience to have, for a good cause and amid very picturesque environs.

A quick briefing on our 4 day-3 night trek and we were off, driving up an unpaved road with excruciating hairpin bends every thirty yards or so. The road ended at the village of Pékhri, the highest motorable village in the area. It was here at the dead end of the road that we met our group of porters and guides waiting in the shade of a tree. They were a team of sure-footed young men from Pékhri who knew the terrain and had the skills for survival in the mountains. The sizes of the loads on their backs (which included a tin of oil, a pressure cooker, a huge aluminium trunk-case with supplies and a stove among other things) quickly demolished any sense of smugness I might have felt at my 9 kg backpack. To each of us they handed a small packet, our lunch, to be had on the way. Our aim today was to reach the camping ground at Rangthar, the half-way point of the ascent to our ultimate destination, the high mountain meadow of Maráhni.

And so at mid-day we started up a narrow path hugging the almost vertical mountain side in a single file. The steep slopes were covered with short grass, but entirely devoid of any shade. The sun was blindingly bright and burning hot and the dry mountain air was dehydrating. Our progress along the dusty path was laboriously slow. Keeping my eyes fixed on my tiny shadow at my feet (for the glare was too bright and the slopes too bare to look up) I trudged along. One of the guides who was carrying that heavy aluminium trunk was walking right behind. After we got talking he told me that he had run a fever a couple of days ago was feeling rather weak. He still had a nasty cough. Yet I was sure the man was  walking slower than his usual pace only to keep me company and was probably feeling  stronger than what I felt by a margin. After about an hour of progress in this fashion we rounded a shoulder of the hill, and the snow-capped peaks above the Tïrthán valley suddenly came into view shining painfully bright against a blazing blue sky. Here on, the climb seemed easier, now that we could see what we were climbing for. Yet, by the time we reached the tiny terraced fields near the village of Lákcha enroute, I was soaked in sweat, gasping for breath and giddy, with legs that felt like jelly.

Lákcha was the highest permanent settlement that we would encounter during this trek. It was not connected by any roads (save for the cattle-track we’d just come up). To live here meant doing the hard climb we had just done almost every day, hardly an enviable prospect. The village was situated on a small ledge of land on a narrow ridge the sides of which we had just scaled. Other than the fact that no two houses in the village were at the same level thanks to the uneven ground, it was like any other Indian village. It smelt of cow-dung and straw, and had narrow winding paths that passed between houses. Round every corner, snot-nosed kids peered at us curiously from behind their equally curious mothers. We refilled our water bottles at the communal water-tank (fed by a stream), and had our lunch of paranthas and a banana by a shed with a view of the valley, the river and the snows above.

The rest of the climb that day was equally tough, up steep inclines and rocky dusty paths. But now these upper slopes were covered with bushes that provided some shade. The late afternoon sun was also not nearly as intense, and though my body ached and my lungs almost burst with exertion, the gradually cooling day provided some relief.

It was on this leg of the climb that I met Küshál Singh. As I clambered up a steep mud-bank, I saw sheep grazing on the hill-side. A few minutes further on, there appeared the figure of a tall slightly built boy of about 12 or 13 watching over the sheep in the shade of a bush. A dog and a lamb kept him company. He looked up as he heard my laboured footsteps coming up the path, a mixture of curiosity and apprehension on his face. He had the same finely chiselled features that most of the hill-folk were graced with, and like the many of them, his eyes betrayed a trace of mongoloid ancestry from Tibet. With as much cheerfulness as I could muster under the circumstances, I shouted a greeting and asked him if the sheep were his. He nodded without a word. Pointing to my camera I asked him if I could take a photograph of him and his lamb. Once again, there was no response except that he picked up his lamb and stood up. Half-afraid he would scoot as soon as I raised the camera to my eye, I clicked a tentative photo, and found him still standing his ground (perhaps out of curiosity for the SLR lens or perhaps because he thought he was too big a boy to run away). Taking that as a yes I clicked a couple more. Not surprisingly, he was too self-conscious to smile for the camera. Finally as I turned to leave, he seemed to decide that it was ok to talk to me after all, for when I asked him his name he said in a small but resolute voice, “Küshál”.

Little knowing that I was to meet him again I left Küshál and his sheep behind and struggled onward through the thick bushes, for I knew this was the last leg of the climb before Rangthar. After another half hour of tough going (and four hours since we started climbing), the path opened out into a magnificent open meadow bathed in the late afternoon sun. The fresh green grass was carpeted with yellow and white wildflowers and the land undulated gently like the swells of the sea under a breeze. The meadow was bordered by a steep mud embankment crowned by a stand of deodars on my left, beyond which the hill fell away into a heavily wooded valley. On the right the meadow sloped gently up before falling away suddenly into the deep Tïrthán valley beyond which rose glittering snow covered peaks. Behind me lay the path up from Lákcha through dense brushwood. The tiny slate-tiled rooftops of the houses were just visible below from where we had come while lower still on the right was the thin ribbon of the river. And up ahead rose the crest of the hill clothed in stands of oaks and deodars beyond which lay our destination, Maráhni.

Relief washed over me as I realised we had reached Rangthar at last. I sat down in the shade of the mud bank to catch my breath. In front of me a wall of mighty snow-clad peaks pierced the blue sky, receding far into the distance where cloud and mountain could no longer be distinguished. But for a few minutes, not even this vista could rouse my aching body from its desperately needed rest. I closed my eyes as the wind sighed through the deodars and calls of ravens circling in the valley floated on the silence.

You can read more here. 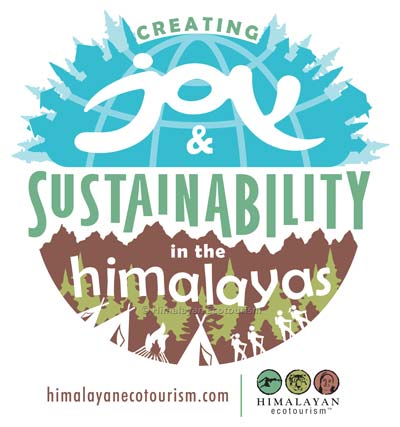